What is Virtual Reality and What should it be?

Virtual Reality is the computer-generated simulation of a three-dimensional image or environment that can be interacted with in a seemingly real or physical way by a person using special electronic equipment, such as a helmet with a screen inside or gloves fitted with sensors. 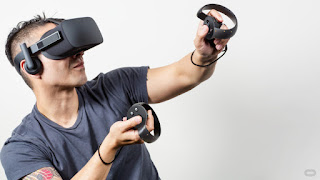 What is Video Game Addiction?

Video Game Addiction is described as an impulse control disorder, which does not involve use of an intoxicating drug and is very similar to pathological gambling.  Video game addiction has also been referred to as video game overuse, pathological or compulsive/excessive use of computer games and/or video games.

How Can Someone Get Addicted To it?

They usually use gaming as a way to escape from everyday life, these type of gamers avoiding problem by playing games, which in turns interferes with their lives because they're so busy playing game.

Joe Hilgard, a doctoral candidate in the Department of Psychological Sciences in the MU College of Arts
and Science, did a studies that supports the claim that MMORPG's are the most addictive genre of video games.
"The games provide opportunities for players to advance levels, to join teams and to play with others. In addition, the games provide enormous fantasy worlds that gamers can disappear into for hours at a time and forget about their problems. MMORPG's may be triple threats for encouraging pathological game use because they present all three risk factors to gamers." says Joe Hilgard.
Posted by Unknown at 20:43 No comments:

Video games today are a lot more violent than a game created in the 1980's. and a research published in the JAMA Pediatrics, a journal of the American Medical association by researchers in Iowa state university and the national institute of education in Singapore, found hints that violent video games may set kids up to react in a more hostile and violent way.

3,034 boys and girls in the third, fourth, seventh, and eighth grade were asked detailed question about their video games habit 3 times over a period of 2 years.
overall, their aggressive and violent behavior declined slightly throughout the studies, but that's because children tend to act less aggressively as they grow older.

but a closer look at kids who play more hours of violent video games per week revealed increases in aggressive and violent behavior than the other.

But studies like this often fail to account for other factors that can contribute to aggression, such as violence in the home, abuse, and mental illness.

The point of this continued debate, though, is that not all players of violent video games are gonna commit violent crimes.
Posted by Unknown at 04:19 No comments:

According to a study released by the Entertainment Software Association, Adult women occupy the largest demographic in the game industry.
Women over 18 years old make up 36% of the gaming population, followed by adult men at 35%. 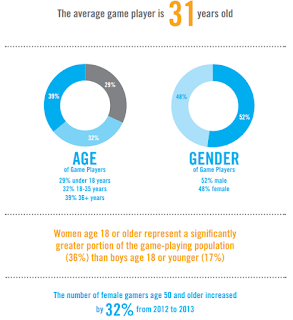 Sadly enough, the gaming industry haven't caught up with these numbers,
sexism still runs through the gaming industry, using women as an object rather than a human.
in the last of us ellie are portrayed as an object the player uses to pass through an obstacle.
in super mario, princess peach are portrayed as a damsel in distress in which the player must rescue.
Posted by Unknown at 03:39 No comments:


What is a genre?

A genre is a category of literature or other form of art or entertainment (such as paintings or music) based on certain defining criteria.

Genre in video games refers more into the gameplay, and not into the story like a movie is.


But why is it different?

Why is a genre defining video games so different from defining a movie?
let's look at it this way,
you are chilling with your friends in a cafe and one of your friends suddenly brings up this question "Hey guys, wanna watch a movie in the cinema? i heard about this new movie that's suppose to be really good" and your other friend said "yeah sure, what's it about?" "i don't know, but i heard that it's a first person shooter, adventure, puzzle movie."

wouldn't that be weird to hear? but what if they are talking about a game? it wouldn't be as weird.
saying a game to be a first person shooter, action, adventure game.
Posted by Unknown at 01:04 No comments:

Ludic originating from the Latin word ludere which means 'to play'. Any word with the root 'lud' in reference to videogames and videogames study refers back to play or interactivity. Gameplay and "win-states" are types of ludic functionality that separate and individualize videogames from other media and from themselves.
Ludo narrative dissonance refers to conflicts between a video game's narrative and its gameplay.
or simply it essentially refers to anytime a video game's mechanics or gameplay betray the story that the game is trying to tell.
Let's look at watch dogs for example, we have Aiden Pierce who is portrayed as someone who is really heroic and mysterious in the story, but the player can shoot people in broad daylight.
There's also a cut scene in where Aiden visits the grave of a loved one whose death basically sets up the whole game but after the cut scene finished, the player could climb on top of his niece gravestone.

Game these days always come with either Realistic or Stylised Graphics.
Each of them come with their own advantages and disadvantages


Some player like how a game comes with a realistic graphics, since it helps the player dive into the game easier, but sometimes it can go a bit too far, if the Realistic graphic becomes more "Realistic" gaming would be a little bit scary, think about it this way, would you play GTA with graphics that is so "Realistic" you can't differentiate reality between a game. wouldn't it be scary?


Graphics doesn't always ensure how well a game will sell.